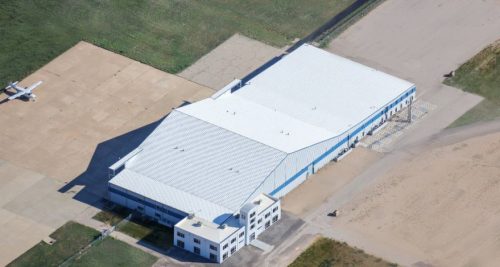 NanoAvionics USA facilities at the Midland Air and Space Port

Logan, Utah, USA, 6 August 2019 – NanoAvionics continues its business expansion to become the go-to partner for nanosatellite constellations globally by making two strategic appointments and opening a factory and office in the USA. Franklin Brent Abbott, the former chief executive for AAC/Clyde Space North America, will join the company as CEO of NanoAvionics US Inc. and Robin Sampson as business development manager for NanoAvionics UK and Western Europe. They will be operating from the facility in Midland, Texas, USA and the UK space cluster at Harwell Campus, Oxfordshire, opened in January 2019, respectively.”

Vytenis J. Buzas, chief executive officer of NanoAvionics said: “North America and Europe are two vital markets for us, and with Brent and Robin, we are adding two world-class talents to raise our presence in those regions. Both are experienced leaders with proven track records of developing revenue opportunities and achieving profitable and sustainable long-term growth.

“Brent has more than 20 years of experience in the space industry and his business acumen will help us to establish NanoAvionics US Inc. as a chief provider of nanosatellite solutions throughout the Americas. Robin has been a prominent member of the nanosatellite community since its beginnings, with over a decade of professional experience in the space sector including technology, mission and concept development. Their senior commercial new space experience will be invaluable as we continue building our global business.”

Brent Abbott said: “The business applications for small satellites continue to expand and in only a short time NanoAvionics finds itself among the top space companies for delivering proven, low-cost satellite platforms and space segment hosting. NanoAvionics is paving the way for cost-effective IoT, communications and remote sensing missions in the world. It is now bringing that knowledge and manufacturing to the US market to support Department of Defense prime contractors and commercial enterprises. I’m very encouraged and excited to help grow the existing US and Americas business and expand our manufacturing capacity in Midland, Texas.”

Robin Sampson said: “The company possess a first rate mission heritage among industry players through its mature 6U and 12U buses portfolio, standardised and optimised for professional service applications. I’m delighted to build upon NanoAvioncs’ position in the nanosatellite industry with its innovative products and services. I’m confident I can draw on my experience to help NanoAvionics compete in the space sector, open more doors and support its regional growth in this fast-moving market.”

Before joining NanoAvionics Brent was the CEO and head of North American operations for AAC/Clyde Space. Prior to that, he held several senior roles at Surrey Satellite Technologies US (SST-US), where he was instrumental in landing the joint US-Taiwanese COSMIC-1/Formosat-7 constellation. He also started the hosted payload program at SST-US with the first all commercial hosted payload satellite OTB-1 (Orbital Test Bed) leading to >$80 Million revenue of follow on business with OTB-2 and 3. When working for Honeywell Defense and Space, he was a business development manager and invented the Miniature Momentum Control System that was developed jointly by Honeywell and the Air Force.

Robin was the founder of Trade in Space, a fin-tech company using satellite-data to facilitate commercial transactions. Before that, he was a member of the Board of Associates of the Scottish Centre of Excellence in Satellite Applications and worked for Clyde Space for nine years in a range of positions including Head of Business Development.

Since the beginning of this year, NanoAvionics has made big steps by providing constellation infrastructure to support incumbent IoT/M2M operators and companies aiming to start satellite services. In June, NanoAvionics received £10 Million funding by EU Horizon 2020 and ESA (among private investors) for a global satellite IoT infrastructure. Together with their consortium partners Antwerp Space and KSAT they will launch a constellation of nanosatellites for IoT/M2M providers, starting next year. Instead of entering the IoT/M2M market directly, NanoAvionics will operate the constellation as a B2B infrastructure offer to IoT/M2M service providers.

NanoAvionics was the first company to develop preconfigured nanosatellite buses. In April this year they launched two of those 6U multi-purpose satellites for IoT customers Blink Astro (USA) and Lacuna Space (UK) ­and for AST&Science (USA). One of the M6P-based satellites was built in less than five weeks, unprecedented in this industry. A result of NanoAvionics’ industrialised approach in building satellites that also leads to reduced manufacturing costs.

They were also the first company to launch a nanosatellite with environmentally friendly ‘green’ chemical propulsion into orbit. The enabling propulsion system for small satellites (EPSS) was developed in-house by NanoAvionics.