NanoAvionics has been awarded a publicly-tendered contract to supply the M6P 6U nano-satellite bus to the Norwegian University of Science and Technology (NTNU). The M6P’s unique competitive advantages will deliver high performance, the pointing accuracy and multi-year service life required of NTNU’s HYPer-spectral Satellite for ocean Observation (HYPSO). Once in Sun-synchronous orbit, the M6P-based HYPSO will monitor algal blooms and other aspects of ocean health in an autonomous synergy with robotic agents at the Norwegian coast.

“I am honoured that NTNU selected NanoAvionics to supply their ocean observation mission,” NanoAvionics Chief Executive Officer Vytenis J. Buzas said. “The M6P’s unique technical capabilities and the NanoAvionics team’s expertise are competitive advantages we bring to every project. In this case, they proved a good match for the challenging nature of the HYPSO mission. Everyone at NanoAvionics is excited about this partnership and looks forward to contribute to NTNU’s innovative approach to oceanography.”

HYPSO will be one part of NTNU’s ambitious multi-agent marine observations system. NTNU will combine observations from the orbiting satellite with those made by autonomous vehicles above, upon and beneath the ocean’s surface. The resulting studies of algal blooms and other biological activity in the ocean will support environmental monitoring and the management of marine resources as well as contribute to our understanding of climate change’s effects on Earth’s oceans.

“We are very happy and excited to be working with NanoAvionics on this project. Their knowledge and support in this project enable us to find the optimal solutions to meet our mission objectives, “says Evelyn Honoré-Livermore, PhD Candidate and Project Manager for the HYPSO mission. The NTNU project team consists of 20 MSc/BSc students as well as 8 PhD Candidates. “NanoAvionics has shown a great willingness to support the students directly and helping them learn more about space engineering and develop multidisciplinary skills. NTNU values this highly, as one of the main goals of the project is to develop future space engineers.” 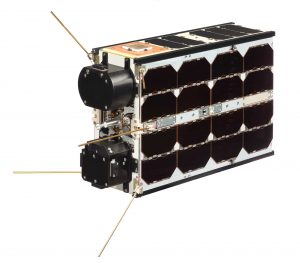 NanoAvionics’ M6P nano-satellite bus provides the maneuverability and the pointing accuracy HYPSO’s observations demand. A 500-kilometer Sun-synchronous orbit will enable the nano-satellite to image regions of interest, such as along the coast of Norway. HYPSO must then perform a slew maneuver to let its hyper-spectral imager record data across hundreds of narrow bands in the visible and near-infrared spectrum. NanoAvionics will configure the HYPSO with the M6P’s most advanced attitude control system to enable the precise pointing required to maximize the observations’ spectral resolution.

In addition to providing the M6P nano-satellite bus, NanoAvionics will provide NTNU with training and engineering support services in advance of the planned launch in late 2019 or early 2020. HYPSO will be the first in a series of nano-satellites NTNU plans for its oceanographic research, following a constellation of remote-sensing focused nano-satellites which will form a space-asset for the multi-agent architecture.

“With the successful launch of HYPSO,” Vytenis J. Buzas said, “NanoAvionics will have demonstrated the flexibility and capability of the M6P nano-satellite bus and established a basis for future collaboration with NTNU.”

NTNU AMOS – Centre for Autonomous Marine Operations and Systems, coordinates the HYPSO project. The project is financed by NTNU, NTNU AMOS, The Norwegian Research Council and The Norwegian Space Centre.

NanoAvionics is a Nano satellite Bus manufacturer and mission integrator. Its flagship multi-purpose M6P is the first preconfigured nano-satellite Bus in the sector, designed to serve emerging commercial space markets. The company’s efforts are focused on enabling critical satellite functions and optimizing their launch, hardware and operation costs – ranging from single missions to constellations. Its core engineering team has implemented over 40 successful satellite missions during the past several years.
nanoavionics.com

The Norwegian University of Science and Technology (NTNU) is the primary Norwegian university in engineering and technology. In addition to engineering and natural sciences, the university offers higher education in other academic disciplines e.g. arts and humanities, social sciences and medicine. NTNU has a close collaboration and a broad range of contacts with industry. NTNU is Norway’s largest university with about 40 000 students.
www.ntnu.no